Want to be a Doctor? This is What it Takes

Dr Ranjana Srivastava’s new book is an insider’s account of a life in medicine. It’s a must-read for students who want to be a doctor, and parents who hope their child will study medicine.

What does it take to be a doctor? This is the title of the book written by Dr Ranjana Srivastava, an oncologist, speaker and columnist for The Guardian.

The book is essential reading for students contemplating studying medicine, and parents who hope their child will become a doctor.

It’s an insider’s account of the good and the not-so-good: the satisfaction and joy that comes from helping patients, and the stresses and demands of studying medicine and working as a doctor.

The book also explores the complex issue of parental pressure and ambition. In this Q&A, The Parents’ Website began by asking Dr Srivastava about a telling encounter she had as part of a panel interviewing prospective students.

Let’s begin with the young man who deliberately failed his interview at the medical faculty, only turning up because his father, a doctor, wanted him to followed in his footsteps. That must have been quite a stunning response to encounter.

It was my first such encounter and initially, I could not believe it. As someone who really enjoys medicine, I was puzzled by this response but it also opened my eyes to the pressure students encounter to study medicine and how it really isn’t a career cut out for everyone, even if there are the requisite marks.

Later, I debriefed with a faculty member who told me that despite the effort that goes into counselling students and making career advice regarding medicine publicly available, a few students like this continued to show up every year. I was relieved to hear that the faculty intended to contact the student’s school to discuss his plight and I still wonder what happened to the student.

As parents, we want the best for your children, so at one level, it’s understandable that medicine ends up being a parental ambition. How deeply ingrained is this type of thinking?

I joke that I must be the only person of subcontinental origin whose parents never breathed a word about studying medicine throughout my school life! After speaking to many students, I think that the majority of the motivation to study medicine seems to arise from within the student.

Now, it is possible, and of course, likely, that students are influenced by the way their parents talk and think about medicine. For example, it is quite common to find children of doctors aspiring to enter medicine. I don’t think there is anything intrinsically wrong about having long and thorough conversations with parents about one’s academic leanings. After all, parents know their children best and almost always have their best intentions at heart. Parents are able to shed light on personality, work ethic and other important attributes and this sort of dialogue can be very valuable.

There is a distinction between outright pressure and an engaged discussion about what’s suitable for a child. As a parent, I admit there is a fine line one must tread. 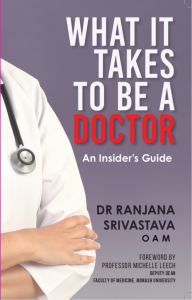 While researching this book, I met two memorable young students. One was deeply unhappy with her parents’ insistence that she become a doctor. The parents were first-generation migrants who had left their home in search of a better life for their two children. They felt that medicine offered the most secure career and a way out of the struggles they had endured.

Coming from a migrant family and now being a parent, I was sympathetic to those parents’ views. However, as a doctor, I had grave doubts about how this student would cope with a very demanding medical course if her heart was never in it. Medicine is a difficult enough journey for the most committed but someone who enters it filled with resentment and disillusionment is hardly set up for a smooth journey – and in fact, we see such students drop out.

The second student’s case was instructive too. His surgeon father talked him out of being a sports teacher and strongly pushed him to become a doctor. Halfway through the course, the student faltered and wanted to take time off. His father wouldn’t hear of it and his mother, though sympathetic,  could not refuse her husband. His father told him that many students felt rocked by the medical course but managed to right themselves – this student felt he had no choice but to try this.

Some months later, his mood turned, he began enjoying the course again and was soon set to become an intern. He was popular with his colleagues and felt that medicine had been the right choice for him. He was very grateful to his father for pushing him to be resilient but agreed that it wouldn’t have worked for everyone.

You write about your own entry into medicine. Without any guidance about what was expected, you turned up for the interview wearing a t-shirt and shorts, to find rows of formally dressed students in skirts and wearing ties lined up in the waiting room. Thinking you’d lost your chance, you took an open, relaxed approach in the interview. The value was that they were seeing the real you.

I have always regarded my entry into the medical course as highly fortuitous – and I think this has given me a deep appreciation for, and empathy towards, students who just miss out. It seems unfair that one’s entire career can swing on a bit of luck on a given day but as the faculty of every medical school keep telling disappointed students and parents, there is no perfect way to select a class of prospective doctors in a highly competitive field. What we have seems to work the best for now, but it has the side effect of letting down 95 out of 100 students. To them, I say that there are other chances to take and, of course, other pathways of entry into medicine if upon reflection, it is what they want. 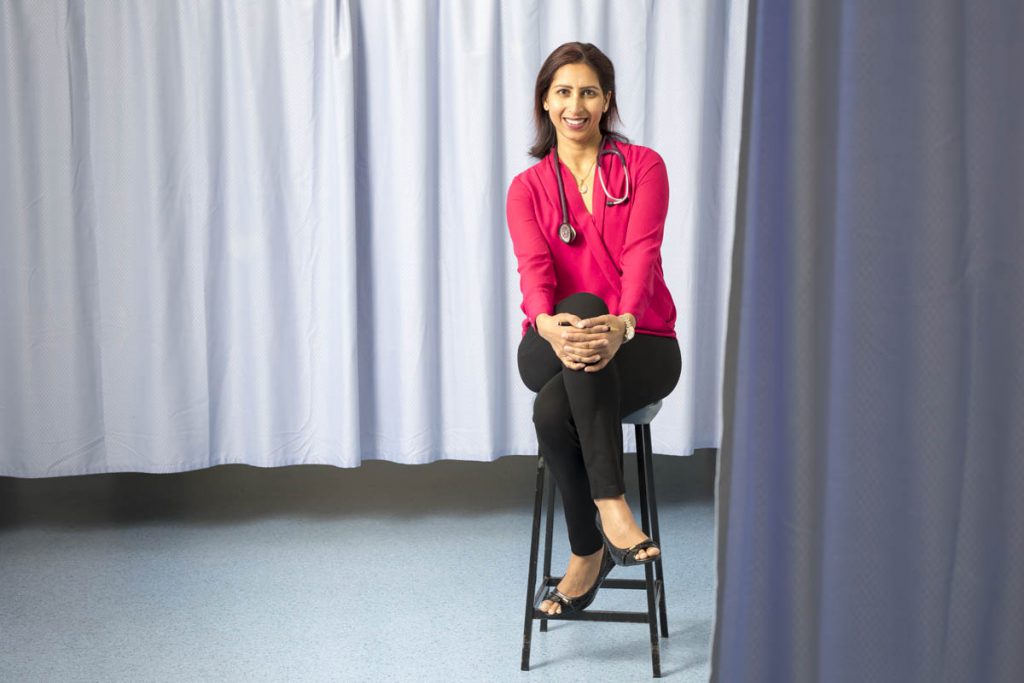 Dr Ranjana Srivastava: ‘At its heart, a career in medicine is not about prestige, income, or respect. It is about service to humanity.’ Images: Dean Golja, Image United.

You stress the need for young people to be certain in their own heart that they want to be a doctor, and the importance of empathy and understanding when you are a doctor. It really reinforces the message that it’s not just about the marks, but an approach to life and dealing with our fellow human beings.

This message can’t be stressed enough. At its heart, a career in medicine is not about prestige, income, or respect. It is about service to humanity. This may sound rather elevated but I am convinced that this is the only way one can flourish in medicine, rather than exist as a doctor. Doctors have a very high rate of burnout and its many consequences. The best immunity against this is a genuine interest in, and belief in, one’s purpose – and even then, it’s hard. Without purpose, however, one is lost.

My strongest advice to aspiring doctors is to spend some time with a real doctor and see what goes on. Most students are utterly surprised that it is not the stuff of television, and that in general, everyday medicine is quite mundane and routine. Some students are instantly turned off by this – and this is a good revelation at their age. Others feel curious to ask more questions. I’d suggest not being afraid to ask questions such as whether the doctor would have chosen this career again, what the worst things about being a doctor are, and what has the doctor sacrificed to get there. The answers can be very revealing and informative – they also make for worthy dinner-table discussions with parents.

The book explores both the good and bad sides of being a doctor, the demands and the rewards. It was obviously important to present the whole picture.

While there are many wonderful things about being a doctor, there are certainly plenty of downsides too. When speaking to students, it was particularly important to me to be honest about all the aspects – anything less would be doing them a disservice. Television dramas and the media frequently glorify doctors, treating their work as if it were a constant parade of rescuing lives and making discoveries. Alas, the reality differs.

Day-to-day medicine is tedious and often sad. One routinely comes up against people who cannot be fixed and problems whose solutions are beyond us. Even young doctors have to look after grievously ill and dying patients and battle with their own emotions. It can be hard to know how to debrief. It’s a shame, but bullying, harassment and gender discrimination in medicine are a live issue, albeit one that is being actively addressed. However, a career in modern medicine is also exhilarating and to collaborate with many talented and brilliant individuals to care for needy and vulnerable patients is genuinely gratifying.

What sort of responses have you received to the book from its different audiences – students, parents, and educators?

This book has been on my mind for a long time and I am glad I wrote it. It feels like a nice extension to bedside medicine to educate the public about a career in medicine. If my insights prompt a student to consider a career in medicine or conversely, be dissuaded from it, it’s a good thing.

Parents who have attended my talks or read the book have been very gracious. They have reinforced my view that most parents really do care deeply about their children’s education and are often working hard to reconcile their own expectations with what their children want to do. Students have told me that reading the book encouraged them to broach a discussion with their peers and parents about the appropriateness of medicine as a career.

I have tremendous respect for educators and career counsellors and have been warmed by their response. The deputy dean of medicine at Monash University has written a very elegant foreword to the book, in which she wisely discusses the makings of a good doctor from the perspective of one who is a scientist, clinician, teacher and mother. I believe career counsellors will find valuable information in the book with which to advise students.

You planned to study engineering if you didn’t get into medicine, on the basis that it was a prestigious course. What kind of civil engineer would you have made?

An average one – and potentially a dissatisfied one! The world may have been treated to one too many bridge that didn’t lead anywhere and a highway that stopped prematurely. I think I selected engineering as a preference with hopes of studying biomedical engineering or drug design but had never spent a day talking to anyone in the industry or even mentioning it to my teachers or parents! I, and potentially, many citizens of the world, were saved by my not becoming an engineer.

I must confess that I look back on the entire episode with mirth and disapproval and keep hoping that my children will scrutinize their decisions better! Then I remember what I was like at age 16.

What it Takes to Be a Doctor, an Insider’s Guide, by Dr Ranjana Srivastava, is published by Simon & Schuster.

Dr Srivastava is available for teacher and student talks. You can contact her at feedbackrsriv@gmail.com