Thinking about the Write Stuff

Michael Broadstock is using the Feuerstein approach to thinking and learning with his children. A model airplane building session with his son was an opportunity to explore how things might seem the same but are different – including words.

Eye halve a spelling chequer
It came with my pea sea
It plainly marques four my revue
Miss Steaks eye kin knot sea.
Eye strike a quay and type a word
And weight four it two say
Weather eye am wrong oar write
It shows me strait a weigh.
As soon as a mist ache is maid
It nose bee fore two long
And eye can put the error rite
It’s rare lea ever wrong.
Eye have run this poem threw it
I am shore your pleased two no
It’s letter perfect awl the weigh
My chequer tolled me sew.

I tend to write with my ear.

That is to say, I prefer to write so that it sounds write. I don’t hold the pen with my ear.

One of the problems with this is that sometimes I misspell words (see above). It’s not that I don’t know the difference between right and write. I am just eager to get the words down. Unfortunately, as Martha Snow has pointed out, my computer’s spell checker doesn’t always pick up the error for me.

It’s even worse with phone spell checkers, where my messages often get auto corrected to something ludicrously, and sometimes embarrassingly, wrong.

So, despite all the amazing technology we have at our disposal, we still need to think – to use our eyes and our brains – before we press the send button.

Those of you who read my earlier article about listening and asking questions with my kids will know that I have been using Feuerstein techniques to help them improve how they think. I often use the tools when we are playing games, especially strategy games, or when we work on something challenging together.

The other day my eight-year-old son Charlie (pictured, below) asked me to help him build some ‘Micro Fliers’ – small cardboard aeroplanes that you piece together and fly. I agreed on the condition that we do some more ‘thinking games’, and he accepted.

We started sorting all the parts to build the planes. That involves a thinking routine of its own, but the challenge for Charlie was the Fokker Dr.I Triplane. 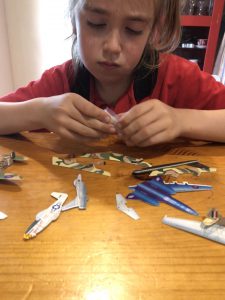 The plane’s middle and lower wings appeared to be identical, but when we looked closely, we found they were, ever so slightly, different. It was probably only by less than a millimetre, but Charlie was concerned that he might break the wings if he forced them into the wrong slots on the fuselage.

He carefully measured each wing and each slot to make sure he had it right, and successfully completed the triplane.

We talked about what we could learn from the challenge with the wings.

Charlie and I have already explored the value of ‘precision and accuracy’, so instead we discussed the way the wings looked identical to our eyes, despite being different.

We turned this into a principle – a rule to keep in mind:

I will carefully compare things that seem the same, to see how they are different.

I asked Charlie if he could tell me about other areas in life – at school, home or play – where things sometimes seem the same, but are different. His eyes lit up. 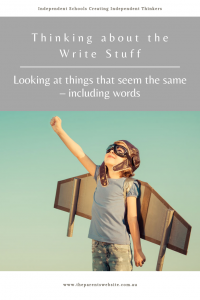 I told him how often people confuse words like your and you’re, or their, there and they’re, and revealed that I often need to check my own work to avoid just that. I asked him to tell me about his favourite homonyms.

Or as Charlie would have put it, I was in a state of oar.