The Meaning of Courage

The Parents’ Website aims to share the best from Independent school communities. Here, Philip Grutzner, Principal of Carey Baptist Grammar School, writes about courage and the role of vulnerability.

The Parents’ Website aims to share the best from Independent school communities. Here, Philip Grutzner, Principal of Carey Baptist Grammar School, writes about courage and the role of vulnerability.

In 2015, our School focused on Gratitude, with many opportunities taken to dig beneath the surface of the word to consider its significance. There were many occasions, including our annual Anzac ceremony, where time was taken to pause, to acknowledge and to reflect on what has been done in the past. We, like many, were taught the importance of being grateful. The step towards our 2016 theme of Courage seems on the surface only logical; we have acknowledged with gratitude and now we should appreciate acts of courage.

Yet there are social critics who suggest this word can be used too liberally, believing it should be reserved for the select few who astound through acts that most dare not contemplate. In 2009, then Governor General Quentin Bryce spoke at the investiture of the first Victorian Cross recipient in a generation, Trooper Mark Donaldson. In this speech she identified the way in which words hold great power in defining an individual’s deeds when she said, ‘We award you a decoration whose words are reserved for the incomparable and unsurpassed. Words whose integrity is untouched by vernacular. Words, rare and revered. Gallantry. Valour. Self-sacrifice. Devotion to duty.’

We have a focus on Courage this year due to the powerful message the word conveys, although not in the way many may think.

What then is courage?

The American sociologist Dr Brené Brown provided a gem for our focus in 2015 when describing gratitude as ‘the difference between privilege and entitlement’. Given our privilege at a school like Carey, it was a clear reminder of the need to be appreciative. 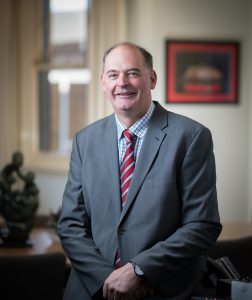 Dr Brown also pries open the word ‘courage’, following a year-long study of fear that turned into a six-year battle for clarity. Thousands of interviews and research papers brought her to the point where she saw a clear divide between those with self-worth and those without, and that difference was courage. However, and here’s the twist, she sought out the history of the word ‘courage’ – the root word being cor, Latin for heart – claiming that to display courage is to ‘tell who you are with your whole heart’. She explains the ‘excruciating vulnerability’ of courage as the individual places themselves in a position where they are doing things without any guarantees.

This is the definition that drives the word ‘courage’, enabling all to express it in a unique way. It is a bold focus for all individuals at Carey in 2016 and brings a sharp edge to the ten ‘Attributes of a Carey Positive Learner’.

The genesis of these attributes dates back to work in 2013 by the whole school staff. It was a project that continued over a two-year period as we sought to develop a list of attributes considered common across all age groups. The process reaped great reward as primary and secondary staff came together to arrive at a consensus, using documents such as the International Baccalaureate (IB) Learner Profile to help direct thinking. After extensive input, ten attributes were agreed upon – these are now known as our ‘Attributes of a Carey Positive Learner’. It has become a focal point for all students regardless of year level and, not surprisingly, courage is included as one of the key dispositions. It could be argued that an ability to display courage brings definition to each of the other nine attributes.

Through courage, an individual connects with authenticity with others around them, boldly being themselves. The Safe Schools program is a case in point. Having the courage to communicate who we really are and what we really think is not always easy, often demanding us to be courageous in demonstrating principles.

Past Grammarians like Hugh Evans and his work in setting up the Oaktree Foundation and now Global Citizens is testament to this.

The courageous individual does not act impulsively, but finds the time to reflect and seeks knowledge in order to better inform their actions. Our society often expects a quick response, particularly given the speed of social media, that demands a reply in minutes rather than days. Slowing down to reflect is not typically encouraged, and in some cases can be viewed as a weakness by a society that is accustomed to an answer at the click of a button. There is a lot of information that can be gathered in this way via search engines and the voice of the masses on Twitter and blogs, but at times there is not a quick fix and value is gained through reflection that is not governed by a stopwatch. But it takes courage to step away from that flow and just pause.

Courage may also demand a degree of perseverance, particularly if the stance of the individual is not commonly shared. It may then be time to be bold enough to consider alternatives, to bring an expression of imagination to a situation that can manifest future thinking rather than dogmatism. When our community walk into our Centre for Learning and Innovation next term there will be stark evidence of imagination in looking at what will be rather than what the world is now. The disposition of the courageous is that they are not scared to inquire, to open their own thinking to the questions and criticisms of others.

We continue an exciting journey at Carey, as individuals are encouraged to place themselves in positions of vulnerability. Our ten ‘Attributes of a Carey Positive Learner’ remain relevant for the three-year-old through to the adult, with all individuals at all stages in life having the capacity to challenge their individual courage through actively seeking out a position of vulnerability. Dr Brown would assert that it is only then that authentic connection can occur. The challenge to be truly courageous is attainable for all, but will always be daunting because it demands we open ourselves up for attack. It is a confronting theme in 2016.

This article first appeared in the Winter edition of Torch, Carey Community News.