The Magic of Myths

Who would have thought that lunch at one of the (supposedly) best burger restaurants in Melbourne could generate a degree of fascination with Greek mythology?

My grandsons had spied this restaurant as they raced to meet me as I wandered home from work during a school holiday break. Someone, somewhere had sung the praises of this chain, so how could I ignore such well researched advice? To cut a long story short, I promised them lunch there the following day.

Perhaps the hearsay was true? On arrival, we discovered a long queue of people waiting on the footpath. Not a problem, according to the boys. We could visit a nearby games shop, also discovered the previous day, and return after the lunch rush.

The games shop was in a deep basement with only a small opening at street level. Weaving throughout the store were aisles full of shelves, loaded with a wealth of treasures. The boys were enthralled as they navigated their way through the maze. Fortunately, their hunger grew, and we eventually returned to street level.

As we chatted over lunch the name of the shop arose, Minotaur Games. I began to relate the story of Theseus and the minotaur, half man, half beast, who lurked in a labyrinth in Knossos. The myth was relished like the burgers that were lunch. I sought to make the most of having a captive audience.

My delight intensified as the boys began to link the story with the shop that they now recognized as a labyrinth. No wonder the entrance was guarded by a giant minotaur, they exclaimed. They laughed at the possibility of taking a ball of silk (a gift given in the story to Theseus from Ariadne) to unravel on their next visit, to ensure a direct pathway back to the surface.

Why not try sharing this myth or others with a child in your life? The Greek word ‘mythos’ means word of mouth and this was the way they were originally passed down through generations. Check out the abundance of Greek myths on the web, but be mindful of course of the need to select those appropriate to the ages of the children involved.

As our bookshelves can attest, Greek mythology has always been of interest to me, but those stories had not really captured my grandsons’ attention until today, when suddenly they were off. The stories now had real meaning for them, and they were able to bridge this meaning into life, essential elements when it comes to new and deep learning. 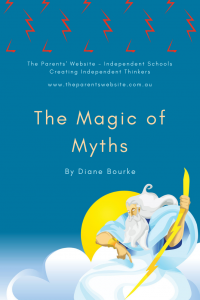 Albert Einstein once said, ‘If you want your children to be intelligent, read them fairy tales. If you want them to be even more intelligent, read them more fairy tales’. He added to this by saying that the creative imagination is the essential element in the intellectual equipment of a true scientist and that fairy tales are the childhood stimulus to this quality. I have no doubt that the same could be said for reading Greek myths to children.

There are other reasons why I had hoped the boys would develop a fascination for Greek myths. On their own, they are awesome, action packed stories, stories that have fed the imagination of humans for thousands of years. Yet, they are still relevant today. My elder grandson is currently writing his own myths. You can imagine his mother’s and my delight when he forwarded his current drafts to us via email recently.

Originally, a Greek myth was essentially a way of explaining the world. The gods are dreadfully human, with a lot of idiosyncrasies and shortcomings and they do many of the things that humans do. What these myths often teach is that when bad things happen, you have decisions to make. Good usually triumphs though not everything has to come to a happy ending. The messages are usually revealed through the stories rather than directly stated, and as such are wonderful opportunities for simple thoughtful discussions about the choices one makes. Be the hero, not the villain, has become our mantra.

Bruno Bettelheim, who specialised in the importance of fairy tales in childhood, believed that fairy tales can aid children in dealing with anxieties they are still unable to explain. Once again, myths could serve this purpose.

Besides, it can be difficult to fully grasp the fundamentals of things like fine arts, literature and performing arts without touching on some Greek myths. References to various aspects of Greek mythology abound in today’s world and, when understood, deepen our thinking.

I walk past a statue of a figure exerting itself to hold up a clock for those passing by to take note of the time. To me, this is the Titan Atlas responsible for bearing the weight of the heavens on his shoulders, a burden given to him as punishment by Zeus. Today, Atlas is also a term to describe books filled with maps. Atlas also refers to the first vertebra of the spine, which allows us to hold our heads up and see the world.

Then there is Nike, the Greek goddess of Victory or Starbuck’s siren logo, optimistically luring customers into their premises. Peter Pan becomes even more meaningful when we understand the reference to Pan, the Greek god of the wild and the shepherds. Sporting teams are sometimes called Spartans, early Greek warriors.

The word academy is often used today as another name for an educational institution. The ‘classical Academy’ was the name of the public garden where Plato taught his school. Some schools use the symbol of the Pegasus as their motto. We have marathons, inspired by the legend of an ancient Greek messenger who raced from the site of Marathon to Athens, a distance of 42 kms, with the news of an important Greek victory over an invading army of Persians in 490BC.

Recently, I talked to the boys about Achilles, an ancient Greek hero from the Trojan War (the Trojan horse is another favourite). Our achilles tendon is named after this mythological figure because it lies at the only part of Achilles’ body that was still vulnerable after his mother had dipped him (holding his heel) into the River Styx. An Achilles’ heel is a weakness despite overall strength, which can lead to a downfall. Think of possible discussions you can have revolving around this idea?

I’ll finish with Pandora’s Box, which has been fascinating people forever and catching the imagination of countless artists. Pandora was given a box by the gods and told never to open it. Despite trying desperately to tame her curiosity, she eventually succumbed. She opened the box and all the illnesses and hardships that the gods had given her came tumbling out and into the world at large. But, as she was slamming the lid shut, she saw hope had remained in the box.

Recently as I complained about something in front of my younger grandson, I was stopped in my tracks when told: ‘Granny, stop it, we always have hope!’

What more could I ask?