The Music Box, by Sienna Boorer

The Short Story Competition run as part of our Arts Learning Festival showcased the creative talents of Victorian students. We’ve asked winners to record their stories. This is The Music Box, by Sienna Boorer, in Year 7 at the Alice Miller School, who won the years 7-8 category.

The Short Story Competition run as part of our Arts Learning Festival showcased the creative talents of Victorian students. We’ve asked winners to record their stories. This is The Music Box, by Sienna Boorer, in Year 7 at the Alice Miller School, who won the years 7-8 category.

Once upon a time a long time ago, in a Kingdom of Kings and Queens, there was a little girl who made her living by selling flower on the street. She was small and sickly looking, her hair was tangled, her face thin, and through the day all she called out was, ‘Tuppence a flower! Please, just a tuppence.’ All she had was a small thin blanket and a little music box. Every day she called and every night she wept. Her eyes were filled with the sorrows that a child should never know.

One very bitter night, the girl lay in a doorway, almost frozen. She held the music box and wished with all her heart that she could have a warm blanket to keep her from dying. In her hand the music box slowly started to turn and sing its little song. Suddenly the doorway in which she was lying opened. The girl fell back in surprise. ‘Oh I am so sorry Miss, I will leave now,’ the girl stammered. The old lady at the door gave a broad grin. ‘Don’t be sorry my dear,’ she said, ‘please take this blanket or you will catch your death,’ and she handed the girl a thick woollen blanket. The girl’s eyes were now full of amazement and gratitude. ‘Thank you, oh thank you!’ she said as she ran off smiling.

As she ran down the street she heard the sound of quiet crying. She stopped and looked around; there in a corner was another little girl, almost naked, with a deformed face. The girl felt pity for the child and kneeled down and with much compassion she handed her the blanket. ‘Here please take this,’ she said. Then quickly she went on her way.

A faint glow came from the girl’s hand as the music box began to turn once more. Even though she had given her blanket away she felt incredibly warm, but she was so hungry. As the sun rose its head over the city, she headed out onto the street to call again for a tuppence.

The day went on and the girl’s hunger grew, as she watched the children of the rich walk past holding fruit buns and laughing, a great sorrow grew inside of her. How she longed for the warmth of laughter to fill her lungs again and a mother to answer her joyous call. Her hunger was making her weak and she longed for food. The sound of sweet music filled the air as the girl’s music box turned and danced.

Storm clouds gathered in the sky and people began to hurry away to their homes. Lightening began to flash so the girl ran to find shelter; she took refuge in a little bakery. Her music box began to whirr and hum and the little dancing ballerina began to rise slowly and there underneath her was a shiny gold coin. The girl’s eyes were wide as she grasped the golden coin in her dirty little hand. The baker who was standing by the shelves of bread and buns said, ‘Can I get you anything?’, thinking to himself a girl like her could not afford to buy a crumb. But to his amazement the girl held out her hand and said, ‘One loaf, please.’ The baker stared at the coin, took it and handed her a big fresh loaf of bread. She grabbed the loaf and ripped a big chunk off, it was the best thing she had ever had.

As she left the bakery she saw a mother with three young children crying for food. The girl ached inside as she remembered that her mother used to do the same, ‘But this time,’ she muttered, ‘they will have what they need.’ She hurried over and held out the loaf of bread. ‘Have this,’ she said. The mother of the children almost cried as she watched her children eat. She looked up to thank the girl but she had scurried away. As the girl crossed the road she looked back as the mother and children ate, she didn’t hear the carriage until it was upon her. Her body was gripped in pain as she was thrown into the gutter. The powerful horse that had hit her continued on its way like nothing had happened. The girl lay in the gutter holding her music box and remembered how it had helped her and how she had helped others.

As she lay there she did not feel cold and she did not feel hunger and so it was that she made her last wish before the light of life left her. With a joyous laugh she cried out in a strong voice, ‘Please, make them all happy.’ And as her eyes closed with a smile on her lips the rain started to full again but this time every drop that fell was pure gold. As the people ran around grabbing the gold the music box made a final turn before it was still for ever more. 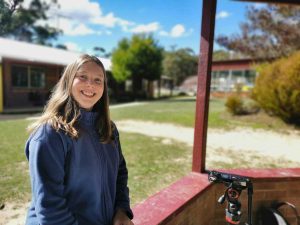 Sienna records her winning story for The Parents’ Website.