‘I knew there’d be controversy, that people would be angry.’

John Marsden’s challenging new book, The Art of Growing Up, has divided opinion. In this interview with The Parents’ Website, he explains his views.

John Marsden knew what he was doing. When The Art of Growing Up, his forthright manifesto on raising children, appeared on bookshelves in July, he was prepared for – expecting – the maelstrom of controversy it provoked.

‘Oh yeah,’ he says, ‘I knew there’d be controversy, that people would be angry.

‘I’ve honestly reached the stage where I laugh at it. I’m not even sure why, whether it’s age or having had 14 years as a principal, or what. I guess I’m sure enough of what I’m saying, or what I think or what I believe, not to be too bothered if people make facile or glib or cheap comments about it.

‘If they engage in a really thoughtful discussion, I’m happy to listen and go through that.’ 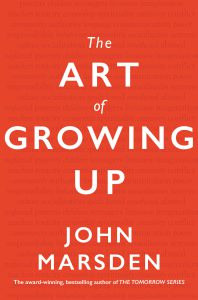 Marsden’s book holds nothing back in its criticism of a culture of ‘toxic’ parenting that has developed, which he argues is causing long-term and in some cases irreparable damage to children.

‘We are seeing an epidemic of damaging parenting at the moment,’ he writes. ‘The familiar benign and (often malign) neglect of decades past continues, but the phenomenon of educated middle-class parents who don’t just love their children but are in love with them has reached a critical level.’

They minimise their child’s transgressions, have no regard to those hurt by their child’s narcissism, block attempts to create a culture of consistent and easily understood values, and blame others for their child’s behaviour.

Marsden draws on his experience as a teacher, and for the past 14 years, principal of the two schools he founded, the primary school Candlebark, near Romsey, and the secondary school Alice Miller, at Macedon, which has a focus on the creative arts. (Both are Member Schools of Independent Schools Victoria.)

He is, of course, one of Australia’s most accomplished and celebrated authors. He has written more than 40 books, mainly for children and teenagers, including Tomorrow When the War Began, and So Much to Tell You. He’s sold more than five million books.

Parenting Going Off the Rails

The Art of Growing Up is confronting reading, and Marsden challenges and forces parents and educators to question their own behaviour. ‘I didn’t hold back,’ he tells me. ‘I didn’t use euphemisms too much.’

You won’t find any like it in the parenting section of bookshops. He doesn’t finish reading most books on parenting because they’re so soft. ‘They pussyfoot around to the point where I just get frustrated and think for god’s sake, say what you think, or what you believe, or stop wasting my time.’

The self-questioning the book provokes is exactly what needs to happen, he explains, because parenting has gone off the rails for too many people. They need to step back and have a long, hard think about what they’re doing.

To illustrate the point, he refers to an encounter he had with parents of a young girl on her birthday. She woke them at 4:30 am, and said, ‘Is it my birthday yet?’. They got out of bed, got the cake and her presents.

‘I had nothing to say to those parents,’ says Marsden.

His most contentious views are those on bullying, which he expanded on in an interview with ABC Radio: bullying was just often feedback from other students about unlikeable behaviour.

There’s relentless persecution of people for no good reason, he tells The Parents’ Website, that’s connected to things such as skin colour or religion.

But in a considerable number of cases – he guesses up to 60 per cent – it’s feedback to a student who is acting in a way that causes other people to dislike them.

‘And I’m suggesting that if you unpack these things you find that there’s often important information for them in what is called bullying.

‘But bullying’s become like dyslexia and autism, these umbrella words, which don’t mean much at all until you unpack them, because they’ve just become slogans that people use to cover so many different situations.

‘And I’ve spent half my life if not more as a school principal unpacking everything that happens in a very detailed way, which will take hours, but I need to do that before I can understand what’s going on.’

Marsden says there is no such thing as a perfect parent, teacher, or human being. So it’s a matter of acknowledging and accepting your own weaknesses and mistakes, and doing what you can to clean up the mess.

But he has a harsher message for parents – if they have really messed up a childhood, the damage can’t be repaired. You can work hard to improve the situation, but if the damage is severe, then emotional damage is permanent, changing a person forever.

He was in Adelaide recently promoting the book, when a woman said to him, sadly – and, he feels, thinking about her own children – ‘But can’t you forgive a parent?’

‘Well,’ he replied, ‘the word “forgive” doesn’t mean much in the context of those sorts of situations.’

The Art of Growing Up is published by Macmillan Australia, RRP $34.99