How Good Nutrition can Boost the Mood of Kids and Teens

Leading adolescent and child psychologist Michael Carr-Gregg has co-authored a new book on mood-boosting snacks for kids and teenagers.

As we grapple with the increasing rates of psychological problems among our young people, there’s a urgent search for the reasons why it’s happening.

The digital revolution and the dominance of social media are seen as big contributors.

Yet there is a growing awareness that part of the answer lies in a very old truism: you are what you eat.

Enter Dr Michael Carr-Gregg, one of our eminent and best known child and adolescent psychologists. His new book, Smart Snacks, 100+ quick and nutritious recipes for surviving the school years, is aimed squarely at improving the nutrition – and therefore the mental wellbeing – of young people.

He and collaborator Flip Shelton have produced a collection of easy-to-make recipes – from energy balls to smoothies to super sandwiches – that address one of the nutritional mainstays of young people – the snack. 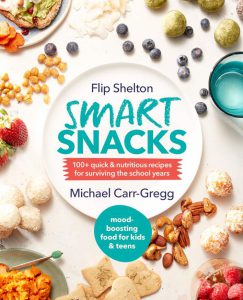 The book combines Michael’s advice and Flips’ recipes, which began as a file in her kitchen of snacks she’s prepared for her own family over the years. The photos are colourful and engaging, the layout easy to navigate.

It’s an important and practical contribution to the diet – and wellbeing – of young people.

‘It’s quite clear that one of the great tragedies that we’re facing now is that one in four of our kids are overweight or obese, and the Australian Institute of Health and Welfare predict it will be one in three by 2020,’ says Michael.

‘And that’s terrifying. But more importantly, there’s now increasing evidence that there is a relationship between the gut and its microbiome, and immune function and brain health.’

One of Michael’s heroes is Professor Felice Jacka, the director of Deakin University’s Food and Mood Centre, whose work has shown a clear relationship between diet and mood.

‘What we know is that the kids are essentially not eating anywhere near enough good food,’ he says.

‘Less than five percent of teenagers are consuming the suggested daily amount of fruit and vegetables. And that is catastrophic. Not just for their physical health, but now their mental health.’

Michael says there are so many more risk factors now impacting on young people in their journey from childhood to young adulthood.

But he is cautious of overstating the impact of social media.

‘I think this is just another moral panic,’ he says. ‘We had the same moral panic around novel reading in 1800 and jazz music and the gramophone record.

‘Now I think while social media does play a role, and I don’t think it’s our friend, the effects are more indirect.’

For example, he says, about 20 per cent kids will get up in the middle of the night and check their social media feed – and that’s going to make them very tired.

Between five to 10 per cent can get addicted to social media. And a child spending two hours or more on social media a day is likely to have worse mental health.

But the issues that Michael is most worried about are exercise and diet – hence the book.

Smart Snacks, he says, is a sneaky way of getting parents to feed their children the nutritional equivalent of a protective factor.

‘We’re trying to get them to understand that the gut really does have a lead role in reducing these terrible, terrible, psychological problems, which is compromising the wellbeing of our young people,’ says Michael.

The book also encourages kids to get involved in food preparation, which, at the moment, they’re not.

It’s also about starting a conversation with them around beneficial foods and good nutrition.

‘And most importantly, the whole gut-brain connection,’ he says. ‘Kids need to know this stuff.’