In a new series, we showcase the great community work of Independent school students and staff.

Three St Catherine’s School students who share the common bond of living with type 1 diabetes have raised $22,000 for the Juvenile Diabetes’ Research Foundation.

The inspiring effort came about when one of the girls, Sarah, was diagnosed with the condition. As part of helping her adjust, staff at the school connected her with two other students, Elise and Mia, who also have type 1 diabetes.

The trio then began raising funds in the school community for the foundation, which is working towards finding a cure for type 1 diabetes.

The girls’ story was featured in the Stonnington Leader last month. Sarah told the paper she was shocked when she first learned she had type 1 diabetes.

‘When I got diagnosed they told me all the symptoms, and I said, “I’ve had those all term”,’ she told the paper.

Her diet hasn’t changed that much, but she must self-inject insulin four to five times a day.

‘The way the girls came together and collaborated to raise the amount of funds for this worthy cause is inspiring,’ said St Catherine’s principal Michelle Carroll.

Thanks to the Stonnington Leader for allowing us to republish this Michael Dodds photograph.

Beaconhills College’s Decade of Support for the Cancer Council 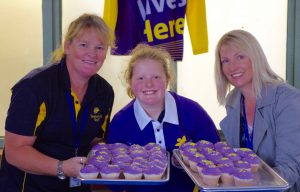 Beaconhills College has officially kick started its 2018 Relay for Life campaign with a cupcake fundraiser at the Pakenham Campus that raised $900.

The 2018 campaign will be the tenth year that Beaconhills College has participated in the event, which raises vital funds for the Cancer Council’s research, prevention and support services.

Once again the College’s two campuses at Berwick and Pakehham expect to sign up hundreds of families from the school, who will walk as the ‘Beacon of Hope’ team at both the Cardinia and Casey events. The relays are among more than 200 events that take place across Australia every year.

Last year, the Berwick Campus team was the highest fundraiser at the Casey Relay for Life.

The College’s 2017 donation to Cancer Council totalled $50,613, which went to The Walter and Eliza Hall Institute of Medical Research to help with research into the role of Epstein-Barr virus (EBV) in certain types of lymphomas.

Beacon hills College’s Head of Citizenship and Service, Clare Tuohy, said the school community – from Little Beacons Learning Centre through to alumni and board members – had enthusiastically embraced the fundraising event.

‘We are all touched at some point of our lives by cancer,’ Mrs Tuohy said. ‘As a College, we want to be part of the research and development so that a cure for cancer can be found.’

Would you like to share your school’s community work through Community Connections? Email Shane Green with the details.